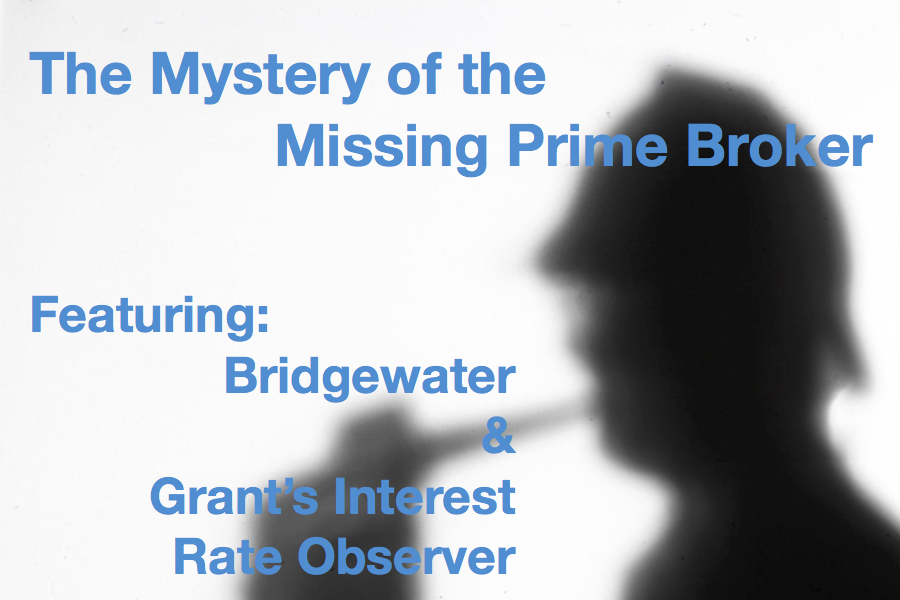 Based on some feedback I received from Francine McKenna, the Transparency Reporter at MarketWatch, I wanted to clarify that in this article I address only the issues related to Bridgewater’s Form ADV. Grant’s Interest Rate Observer also raised some conflict of interest issues around the relationship between Bridgewater and its auditor. If there is an issue there, then two very highly paid compliance departments have screwed up! Here’s Francine’s article on a similar issue at Steve Cohen’s SAC Capital.

Ok, I admit it, I sometimes read ZeroHedge – isn’t that the first step? Today they published this article: “Is Bridgewater A Fraud? Here Are The Troubling Questions Posed By Jim Grant” based on the latest Grant’s Interest Rate Observer which they reproduced in full (well, sort of). The article casts nasturtiums about Bridgewater’s SEC Form ADV filings – something I know a little about. It seemed like typical ZH appealing to the conspiracy nuts, so I took a look at the assertions made. What I found was interesting, and following is my take on the items I took the time to look at:

Quoting from the newsletter:

So the newsletter author is making the following claims:

Both would appear to be mathematically impossible!

Here’s what the filings actually say: 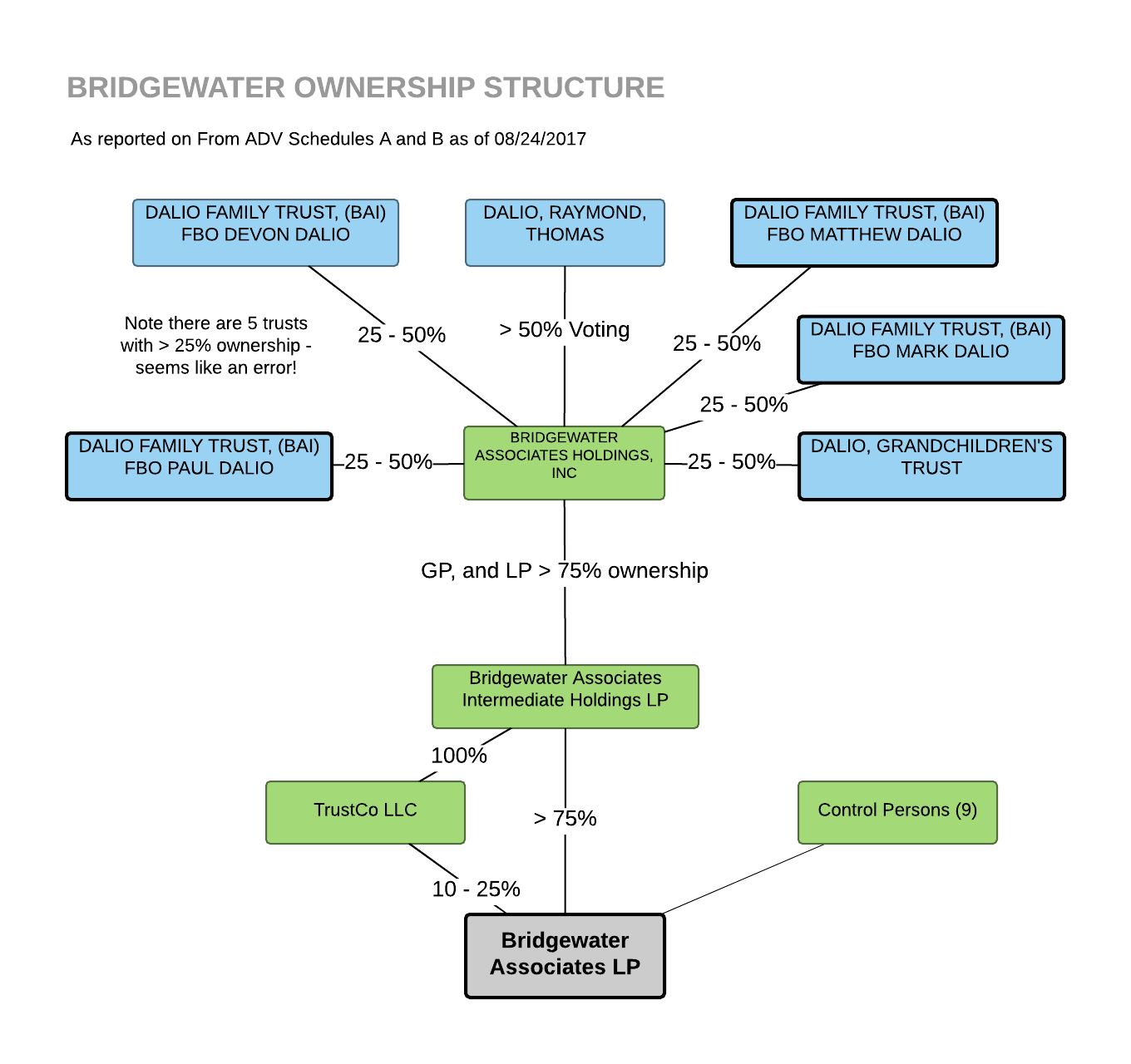 So the first claim is definitely true. But is it nefarious? I doubt it. My guess would be the grand children’s trust came along after the children’s trust. The hapless soul given the task of filing the ADV (a horrendous task – I know having filed them myself), added in the new trust and duplicated the settings used for the other trusts. They simply forgot to set the ownership category to 10 – 25%, instead they left it at 25 – 50%. Form ADVs are riddled with obvious errors.

The Form ADV is Incomplete With Regard to Ownership

The question of ownership varies by the source who reports it. In a July 25, 2011 New Yorker essay, John Cassidy related that Bridgewater employees purchased a one-fifth share in the company from Dalio in a 2010 transaction financed by “several of the firm’s longtime clients.” Assuming approximately the same terms as TRS did in 2012, the investors may have had to borrow $2 billion. Just recently, the  Sept. 13, 2017 issue of Hedge Fund Alert reported the sale of Bridgewater “equity stakes totaling 21% of the business to several large institutional investors including Ontario Municipal Employees and Texas Teachers.” If Cassidy and Hedge Fund Alert are correct, the ADV is incomplete, we are confused or the truth is some combination thereof.

If an owner is not a control person and owns less than 5% of the firm, they do not appear on the list of direct owners and executive officers. So, let’s posit 5 institutional owners with combined ownership of 21% => less than 5% a piece. Why would they be listed?

There is no such clarity about how much financial leverage Bridgewater employs. The firm’s so-called regulatory assets, which incorporate securities financed with borrowed money, foot to $239.3 billion. Given that unleveraged client assets amount to $164 billion, Bridgewater borrows no more than 50 cents for every dollar of investor capital. The second- and third-largest hedge funds, Millennium and Citadel, appear to borrow around $5 for every dollar of client funds. Then, again, Bridgewater,  a macro fund, makes heavy use of the futures markets. Whether it reports those exposures on a net or gross basis is unspecified.

Managed futures traders tend to show leverage below one because clients need only post margin. If I instruct a CTA to trade my account at $10m, I might only need to fund the account to the tune of $3m cash, depending on the CTA’s target volatility. The CTA will report $10m to the press as that is his fee base, he will report $3m to the SEC as that is the value of the portfolio he is trading. There is no choice as to whether Bridgewater reports on a net or gross basis, the SEC is very clear on how you report regulatory assets under management.

A long short equity manager on the other hand (such as Millennium, Citadel, Balyasny, Moore) will report much higher regulatory AUM as they have highly leveraged portfolios.

Lorenz continues: “If you take the time to add up the stated assets from the 33 listed funds in Bridgewater’s ADV, you will tally up $271.3 billion— not the aforementioned $239.3 billion. The difference between the figures could be explained by some double-counting between Bridgewater’s Optimal Portfolio, which mixes Pure Alpha with All Weather. As mentioned above, however, Optimal has $25 billion in AUM, which is less than the $32 billion difference between stated regulatory AUM and the tally from Bridgewater’s funds.

By the way, 13 of the 33 “funds” are combined master-feeder reports featuring an additional 21 private funds. So the total private funds list is closer to 54 than 33!

Fund Name: Fund Name
$AUM (bn): regulatory assets in fund in billions
Trading: Does the fund have the word "Trading" in the name?
Master: Is the fund a master in a master -feeder structure?
Feeders: How many feeders in the structure?
FoHF: Is the fund a fund of hedge funds?
PB Listed: Is there a prime broker listed with the fund?

“As you scroll through the 206 pages of part one to Bridgewater’s filing, you might notice other oddities,” Lorenz goes on. “Only two of the 33 funds have relationships with prime brokers: Bridgewater Equity Fund, LLC and Bridgewater Event Risk Fund I, Ltd., in which 99% of the investors are Bridgewater employees.”

Prime brokers perform a variety of helpful hedge-fund services. They act as a central clearing house through which to settle trades (useful for reducing collateral requirements by netting positions). They lend securities to allow a client to sell short. They furnish margin debt. The brokers earn various fees, including those generated by rehypothecating margined portfolios. Longonly funds or unleveraged funds have little need for such accommodation, but Bridgewater’s funds hardly match those descriptors. Pure Alpha strategies go long and short and All Weather famously leverages its bond portfolios.

There is a little more meat here – there are indeed only two funds listing prime brokers. But let’s try to argue the case that there is no mystery.

Another of the funds, the huge Bridgewater Short Term Investment Fund II, LLC ($59.1bn), is a liquidity fund. It’s looks like a cash management account where they try to put margin cash to work to squeeze out a few extra bps of return. Would that require a prime broker account? Probably not, you usually try to find short-term interest-bearing deposit accounts for this purpose.

So rather than 31 mysterious funds that inexplicably have no prime broker, there are only 5 funds that are not Fund of Funds, and yet do not list a prime broker. That does seem surprising, even if Bridgewater had membership on various exchanges, they would probably make use of other primes brokers to hide their trading footprint. Here’s what the newsletter adds on that:

“Which raises more questions,” Lorenz notes. “Filers of an ADV form check boxes to identify the businesses in which they’re engaged. Bridgewater ticks only one: ‘commodity pool operator or commodity trading advisor (whether registered or exempt from registration).’ You’d expect that a firm as large and active as Dalio’s might also mark ‘futures commission merchant.’ An FCM is ordinarily a member of the futures exchange on which it operates, and membership has its privileges, such as lower trading fees, cheaper margin accommodation and the ability to buy at the bid and sell at the offer.

Then, too, as an exchange member, Bridgewater would be better able to match its orders off of exchange order flow—and to protect its secrets.” Then, too, membership has its obligations.  Futures commission merchants must file financial reports with the National Futures Association and the Commodity Futures Trading Commission. They must meet and maintain a minimum net capital standard. It is not the kind of disclosure for which Dalio has shown much enthusiasm in the past.

I don’t see why Bridgewater would register as an FCM – they are not acting as a broker for any third parties. They could simply be members of the exchange. As for the burden of minimum net capital – are you taking the piss? The capital requirements to be an FCM would amount to walking around money for Ray Dalio!

Finally, if indeed the absence of prime brokers is a mystery, there are 13 funds with the word “Trading” in their name. None of them list a prime broker. Now, just because something is named a certain way doesn’t mean anything, but typically these are the vehicles that are at the bottom of the whole Master-Feeder / Fund of Funds structure, where the transactions that implement the trader’s strategy get implemented. That is where I would expect to see prime brokers listed, and they are not.

Well, there you have my take on ZeroHedge’s take on Grant’s Interest Rate Observer’s take on Bridgewater!

Filing a 200+ page Form ADV is a PITA. And let’s face it, it’s not like Ray Dalio fills it out and files it himself. From experience I know that there are obvious errors in nearly every Form ADV I look at. Does this amount to some smoking gun that Bridgewater is a fraud as implied by the original article and, of course, ZeroHedge’s piling on? Not from my perspective. There are some oddities, but nowhere near the conspiracy ZH would like you to imagine!

I would need to see a lot more than this before I started taking potshots at Bridgewater. But the fact that these issues get raised at all is a reminder of the importance of being meticulous in regulatory filings to avoid headline risk.

Once again, I want to emphasize I am looking only at the Form ADV issues that were raised in the original Grant’s article. I offer no opinion on the wider conflict of interest assertions that were made.